What’s better than dinner? Breakfast!  More specifically – breakfast for dinner, or as we’ve always called it in our house – brinner. You’re thinking to yourself, “Really? I can have breakfast at anytime of the day?” I mean, we do it with brunch right, why not brinner?

There is no fancy secret to brinner, but it’s something that makes your night a little more spectacular.  You can really throw together any combination of your favorite morning meals and chow down.  Some staples in our house include bacon (of course), pancakes or waffles, biscuits and gravy, hash browns, and occasionally scrambled eggs.

Yesterday was a fairly simple night for the hubs and I – just bacon & waffles.  Oh – and these. This recipe found on Things Alauna Makes was pretty easy to whip up, and made a delicious ending to our favorite meal.

Ebelskivers are something I started making a few years ago after purchasing one of those funky pans on a whim – a purchase we don’t regret :) 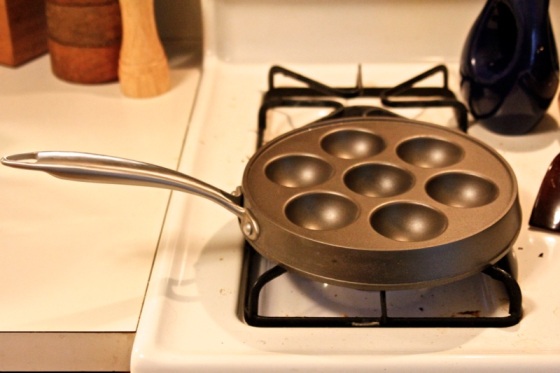 We had a blast trying out different filling options: nutella, pieces of candy bars, fruit, peanut butter, cheese, and pretty much anything else you can think of that will get nice and melty on the inside.  They do take some practice, and I even find that if I haven’t made them for a while the first couple of flips are on the messy side.  But you’ll never know until you try – so now it’s your turn!

Start by heating up your milk to luke warm. You could heat up the stove, but I find that 30 seconds in the microwave works just as well. Next, whisk in your egg yolks (we’ll used the whites later), melted butter, and sugar. Add in your flour & baking powder and whisk again until everything is combined and no lumps remain.  Easy enough, right? 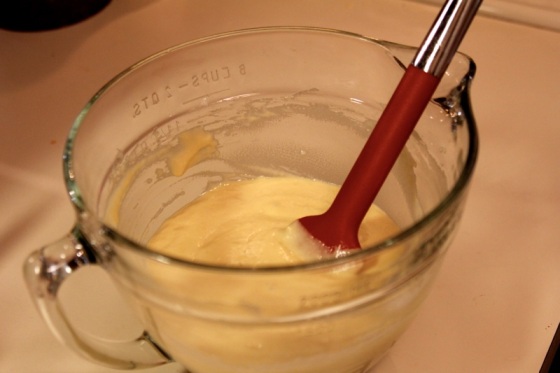 Take your 3 egg whites and whip them until you’ve got nice stiff peaks.  Once you do, you’ll want to gently fold the egg whites into your batter. This will keep your ebelskivers nice and fluffy – just like you’d want your pancakes to be. Don’t over mix or you’ll end up with chewy, tough dough.

It should look something like this when you’re all done.

Heat up your pan over medium and spray with some non-stick spray.  You could butter each well of the pan, but I feel like there’s plenty of butter in the batter and adding more might be a little dramatic.

Spoon in about 1 tablespoon of batter into each well and let it cook for 30 seconds.  This doesn’t have to be a precise measurement of time, but don’t rush it.  Drop in 1 tsp of Nutella (or your preferred filling) and cover with about another teaspoon of the ebelskiver batter. 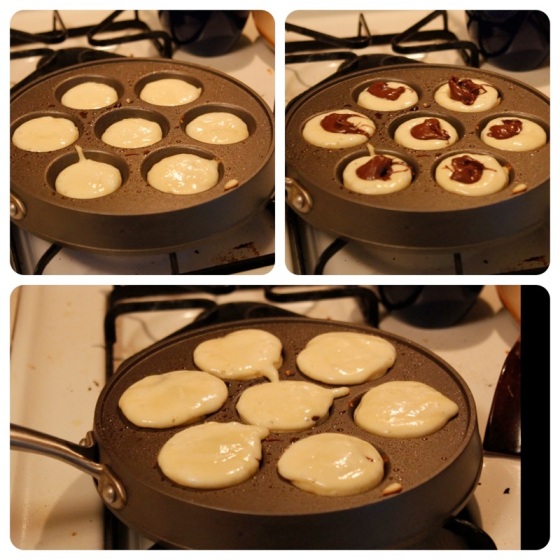 This is where it gets a little more complicated. Turning these puppies over isn’t always easy.  I like to use two wooden skewers that could be used for kabobs, but there are fancy turners that you could buy I guess.  I’ve also heard of people using chopsticks – maybe you could try toothpicks?  Whatever you use to get these over and cooking on the other side you’ll probably find that you might want to try loosening up the edges of the first one or two just to see if they’re done.

I did notice that batter always tends to get on my flipping utensil of choice, but just wipe it off and move on. If you flip too early fear not – you can always flip them multiple times if you like them darker. They really don’t take too long.  I find that after the first flip they’re usually done  in less than 2 minutes.  I’m a little impatient with those first turns so I end up rotating them around a couple of times to get them dark enough.  Watch the heat on your burner, mine is pretty inconsistent so I have to watch them pretty closely.

Once you’re finished plate up the rest of your brinner and enjoy! 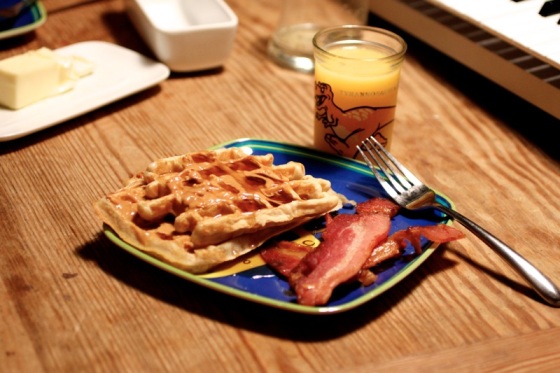 Oh, did I mention that we eat waffles with peanut butter and syrup?  You should really try it – a thing of delicious beauty. 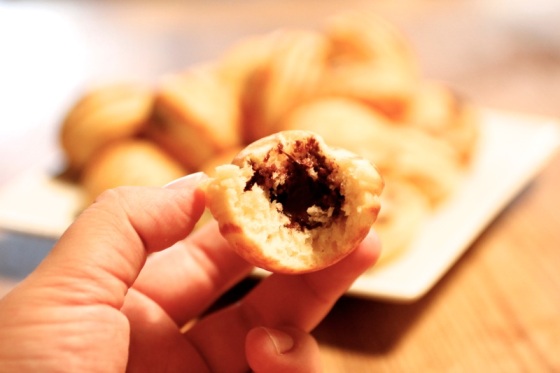 But what could be more beautiful than the delicious, melty, chocolaty bite of a filled ebelskiver.  I justified them because they’re basically pancakes and that’s definitely breakfast food, right? At least that’s what I’m going to keep telling myself :)

Until This Shakes Apart