I have no qualms admitting that I love boxed brownies.  There are plenty of good reasons they sell so many of them – they’re easy to make, really tasty, and you get the added benefit of having your house smell like warm brownies while you whip up a batch.

That said, I love being able to make fantastic desserts without the aid of Betty or Duncan. In my attempts to find the best homemade brownies we have again and again found my kitchen forays coming up wanting when compared to those simple box mixes that always render chewy, delicious treats.  But no more!  Last night something magical happened in my kitchen.

I found this recipe over at Brown Eyed Baker (thanks pinterest!) a couple of days ago, and once we tasted the spoils of my kitchen adventure we knew we had found something worth holding on to. Brownie quest = mission accomplished. So without further ado let me share with you the brownies that really need no introduction.

Start by preheating your oven to 350°F.  Prep a 9×13 pan by spraying with non-stick, or buttering the pan. The original recipe also calls for lining the pan with parchment, but I was out – so now you know that you can skip it, but it might make your life easier if you do use it.

Whisk together the flour, salt and cocoa powder and set aside for later.

Just a quick note – this recipe calls for instant espresso powder, and being someone who has never even had a cup of coffee in her life I wan’t sure why it was needed. It’s not just this recipe though, lots of brownie recipes call for it. Maybe it’s because we’re not coffee drinkers, but we definitely noticed the added flavor.  I think it’s meant to bring out the chocolate, and it wasn’t at all a bad thing – just something we hadn’t expected.  I’m not sure how the taste would change without it, but I bet you could get away with not adding the espresso if you didn’t have it in your kitchen anyway.  Okay, not as quick as I thought – forgive me? Thanks – on to brownies :)

Place your chocolate, instant espresso powder, and butter into a bowl that you can set over a saucepan of simmering water. 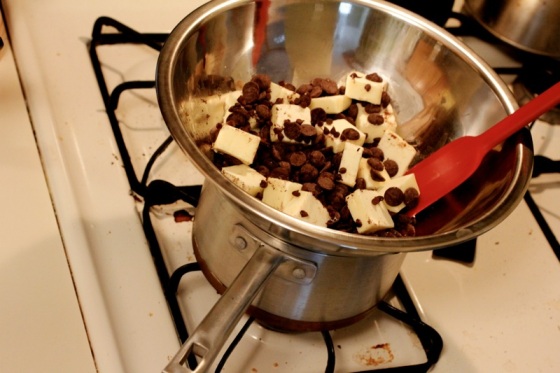 You could also do this in a double boiler, but I don’t have one.  Let me introduce you to my second favorite kitchen accessory – this metal bowl you see here.  I think it cost me $3 at Smart ‘n Final, and I use it for everything!  It’s a great mixing bowl because it hold so much, but it also is the best way to melt chocolate, make hollandaise, or any other number of things that need indirect heat. Okay – back to brownies.

You’ll want to stir your chocolate occasionally as it melts, but don’t over do it.  Over mixed chocolate can get gritty and you’re looking for silky, smooth chocolaty goodness.

That bottom right photo doesn’t take long, and it’s fantastic.  Refrain from eating it by the spoonful :) Once everything is completely melted turn off the heat, but keep the bowl over the water.  Now you can add the sugars.

After incorporating all the sugar you can take the bowl off the water pan.  It should look pretty gritty, but that’s okay.  You want to let the mixture come to room temperature before moving on – no cooking the eggs in the hot chocolate ;)

I know you have 5 eggs – but be patient – we’re not doing this all at once.  Add 3 of the eggs and whisk until it’s combined.  Now you can put the other 2 in and whisk again.  Be gentle.  You don’t want to over mix your brownies at this point.  Herein lies the difference between chewy, delicious brownies and cakey, good-but-not-great brownies.  If you whip your eggs into the batter too vigorously you’ll loose that chewy goodness you were shooting for. Now you can add in your vanilla until it is also incorporated into your batter.

Sprinkle the flour-cocoa mixture into the chocolate. Ditch the whisk and grab a rubber spatula to fold the flour into your chocolate.  Again, don’t overdo it.  You will probably still see bits of flour in your mixture, and that’s just fine.

Now you’re all set to bake, so pour this mess into your prepared pan. Smooth out the top if you need to, and get it into the center of your oven!  Bake for 30 minutes – rotating halfway through.  You’ll know it’s done when a toothpick inserted in the middle comes out mostly clean.  Yes, you’ll still have a few wet crumbs sticking to it, but you should – brownies are supposed do that.

Now we both know that you want to dig right in, and who could blame you.  However, one of my least favorite things about brownie eating is having to eat brownie pieces.  I know – a brownie is still a brownie, but there’s something about having the whole cut up piece that is just ideal.  To avoid a broken (although delicious) mess, let everything cool off before cutting.  If you did use parchment paper you have it a little easier; once everything has cooled off you can just pull the whole batch out of the pan and cut.  I didn’t use parchment, but was still able to flip my brownies out of the pan (after loosening the edges) and then cut.  I’ve also heard of people putting these into the refrigerator after they’ve come to room temperature to make cutting easier that way.  To each his own I suppose.

*Update* I just pulled my pan out of the fridge to see if they would be easier to cut – and wow! I didn’t know cold brownies could be so awesome. So for what it’s worth, hot brownies with scoop of ice cream = great…cold brownies = awesome!

Enough with the cutting – on to the eating.  I had the awesome timing of making these just before my husband got home from work. It’s always a good  sign when someone comes through the door and remarks “Wow, it smells amazing in here” even before “hello.”

I would suggest pouring yourself a nice cold glass of milk to accompany these.  They’re shiny, chewy, and above all amazingly delicious.

Shouldn't You Be Working?